Last Updated 5 months ago.Writing reading guides for some minor characters, I realized how unhelpful this kind of approach will be for major ones. It’s especially the case with Spider-Man my favorite Marvel Superhero. I think I’ll come back to write about specific storylines, but to start, I think it’s better to go with a guide to the best entry points in Peter Parker’s long and eventful life.

First things first, I won’t talk about Miles Morales, the other much younger Spider-Man here, just about Peter Parker. Also, I don’t care for the Ultimate universe, so I’ll skip it too. Sorry.

Today, everybody likes to start at the beginning, but the first Stan Lee stories are not really for the Spidey newbie. It’s quite fun, but dated, lacking the kind of sophistication and sensibilities we want in comics nowadays. You can still go back to the ’60s later. For now, I think the best way to familiarize yourself with Spider-Man is with something ‘modern’. 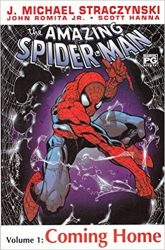 1. The Amazing Spider-Man, Vol. 2, from Issue 30 – In June 2001, J. Michael Straczynski started to write the adventures of Spider-Man and gave to the superhero a much-needed new life. A new mythology was introduced and some great stories come from it.

You can find that begining in the The Amazing Spider-man : Coming Home TPB.

FYI: Once Amazing Spider-Man approached issue 500, they switched back to the old numbering, the v.2 was no more. 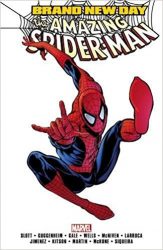 2. The Amazing Spider-Man #546, Brand New Day – It’s 2008. After one of the worst storylines imposed by Marvel editors onto Straczynski, Spider-Man got himself a reboot.

At that time, Peter’s secret identity was made public and some old enemies try to eliminate him for good. Aunt May was killed, but Mephisto proposed a deal and Peter took it. Now, May is alive, but his marriage to Mary Jane Watson has been erased and Harry Osborn is again alive. Also, Peter has his original mechanical web shooters back.

The good thing here is that you can discover Spider-man’s world with him as he realizes what has changed in his world. The stories are also pretty good.

Those issues are collected in The Spider-Man Brand New Day Complete Collection. 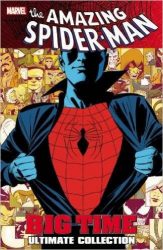 3. Amazing Spider-Man#648, Big Time – It’s 2010. The beginning of Dan Slott’s era. He wrote some stories before, but became the sole writer at that point. Slott doesn’t use Mary Jane, but he loves to give new life to old characters and that’s what I like the most about him, his capacity to take old enemies and make them exciting again.

Today, Slott is still in charge. He wrote some great stories and took real risks, especially during the Superior Spider-man story arc. I loved it, but it’s not the best way to start IMHO.

Those issues are collected in The Spider-Man Big Time Collection. 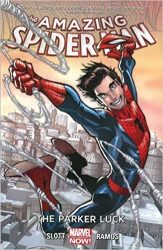 4. Amazing Spider-Man #1 vol. 3 – November 2014. Dan Slott is still here, but the Superior Spider-Man is not. It’s Amazing again and it’s a kind of fresh start for Peter Parker. In that spirit, it’s also a good start for new readers who want some pretty fresh and accessible stories. Plus, it leads to the Spider-verse event in which you can meet all the Spider-Men of the Marvel Universe then some. I’ll probably write a guide to that some day.

The last ‘reboot’ is called Spider-Man Worldwide. It’s part of the new Marvel Universe post Secret Wars. I like it a lot, but I don’t think it’s good for new readers to start here because you can’t really appreciate the situation if you never knew what Peter’s Life was before. The start of volume 3 is, for now, the most recent entry point I could recommend for newcomers. 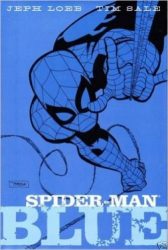 5. Spider-man: Blue – If you’re not interested in reading a lot of Spider-Man, but still want to have an idea of who Spider-Man is as a superhero, this story from Jeph Loeb and Tim Sale is pretty great and standalone.

It’s a six-issue storyline that gets you back in time, after Gwen Stacy’s death (Gwen was Peter’s first love). It’s a bit nostalgic, but you’ll get an interesting view into Peter’s soul, in a way.

After that, I’ll recommend jumping to Straczynski’s era.

previousJessica Jones Reading Order, From Alias to the Defenders
nextLemony Snicket’s A Series of Unfortunate Events Books in Order