X-Men by Jonathan Hickman Reading Order: How to read the most ambitious X-Men run in a long time?

For a long time, X-Men comics were just a second thought at Marvel Comics. And then, Jonathan Hickman came.

What are the X-Men by Jonathan Hickman about?

A new era begins for the mutants of the Marvel World. With artists Pepe Larraz and R.B. Silva, writer Jonathan Hickman uses past, present and future to build a new kind of X-Story for the Mutantkind.

Charles Xavier has a plan. He makes an offer to the human in order to build a new Mutant nation on Krakoa Island where all the mutants in the world—good or bad—are welcome. Together, they will take their place in the future and nothing will stop them. It’s a new beginning, but humans may not be ready to accept it.

I. House of X/Powers of X

These two miniseries work in concert to build a prologue to the newly revised world of the X-Men by Jonathan Hickman. 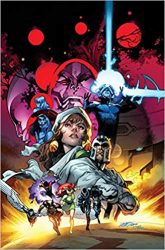 The House of X & Powers of X are collected in one book, but if you want to read issue by issue, this is the reading order:

The new X-Men statu quo is in place. Now, new series are created to tell the multiple stories written by Jonathan Hickman and his Marvel collaborators.

Miss Julia Books in Order: How to read Ann B. Ross’ series?