Last Updated 5 months ago.Last week, I did a reading order for a spin-off series. I thought I could continue in that direction, but not with a Clive Cussler series. Instead, we are talking about a John Sandford series.

Who is Virgil Flowers?

Thrice divorced and in his late thirties, Virgil Flowers is a member of the Minnesota Bureau of Criminal Apprehension (BCA), who reports to Lucas Davenport, the main protagonist of the Prey series.

In fact, Virgil Flowers was also a supporting character in some of the Prey novels, including Invisible Prey and Storm Prey. Brought to the BCA by Davenport himself, Flowers was in the army and the military police before relocating to Bluestem where he operates pretty much on his own. 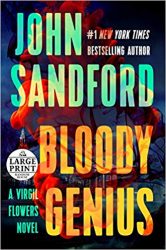