If you like Jack Reacher, the Peter Ash series is for you.

Who is Peter Ash?

When Peter Ash came home from the wars in Iraq and Afghanistan, he needed to deal with what he calls his “white static,” the buzzing claustrophobia due to post-traumatic stress that has driven him to spend a year roaming in nature, sleeping under the stars. He couldn’t stay away forever and, when he returned to civilization, he ended up in a lot of unwanted problems to deal with in an explosive way. 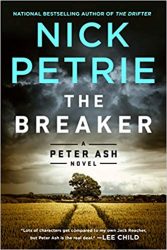 The Oz Books in Order: How to read L. Frank Baum’s children series?

Death on Demand Books in Order: How to read Carolyn G. Hart’s series?