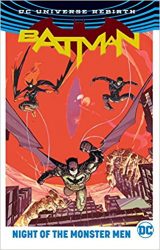 Like I said, it’s a short one, with only 6 issues to collect. You can jump right in even if you haven’t read the prior comics in the series. Well, almost.

It’s not really a necessity, but I recommend reading Batman Vol. 1: I Am Gotham in order to understand who is Gotham Girl and what the deal with her. If you want to know a bit more about the place of Batwoman, Spoiler, Orphan and Clayface, you can read Detective Comics Vol. 1: Rise of the Batmen.

And now, The Night of the Monster Men:

Naturally, all those issues are collected in one TPB simply called Batman: Night of the Monster Men.