By the writer of the Will Trent book series.

What is the Grant County series about?

The narrative takes place from the perspective of three main characters: Sara Linton, the town’s pediatrician and part-time coroner; her ex-husband, Jeffrey Tolliver, who is chief of police; and his subordinate, detective Lena Adams. 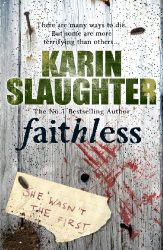 Third in the Will Trent series, the book is a sort of follow-up to Beyond Reach, as you reconnect with Dr. Sara Linton after the explosive ending.