Long before the Harry Potter series became the books children read, there were The Chronicles of Narnia. You know, the one with the magic world that inspired Fillory in Lev Grossman’s The Magicians (no reading order needed for this one!). Seriously, these stories are still really influential and there were not even published in a chronological order. If fact, finding an order that pleases everybody is near impossible. That said, let’s try at least two propositions:

What are the Chronicles of Narnia?

British classics of children’s literature, The Chronicles of Narnia is a series of seven high fantasy novels written by C.S. Lewis.

Set in the fictional realm of Narnia, the series narrates the adventures of various children who play central roles in the unfolding history of that world full of magic, mythical beasts, and talking animals.

The Chronicles of Narnia Books in Order:

There is some issue around the placement of The Magician’s Nephew and The Horse and His Boy in the series. Both are set earlier in the story of Narnia, but published after, making them some sort of prequel.

When first published, the books were not numbered. Those advocating of a chronological order use C.S. Lewis’s reply to a letter from an American reading who was having an argument with his mother on the subject:

I think I agree with your [chronological] order for reading the books more than with your mother’s. The series was not planned beforehand as she thinks. When I wrote The Lion I did not know I was going to write any more. Then I wrote P. Caspian as a sequel and still didn’t think there would be any more, and when I had done The Voyage I felt quite sure it would be the last, but I found I was wrong. So perhaps it does not matter very much in which order anyone read them. I’m not even sure that all the others were written in the same order in which they were published.

Some specialists think that C.S. Lewis was just being nice, but he could have changed his mind on the subject later. In the end, like Lewis wrote : “perhaps it does not matter very much in which order anyone read them.”

Some people tend to advise new readers to go for a publication order. The most compelling argument is the building of the world. The Lion, the Witch and the Wardrobe is really an entry book to the world of Narnia. So, it is the order that follows. After that, there will be a reading order for those of you who prefer a chronological approach. 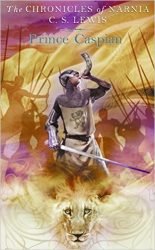 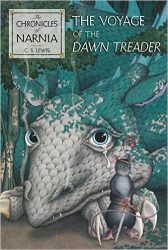 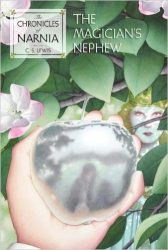 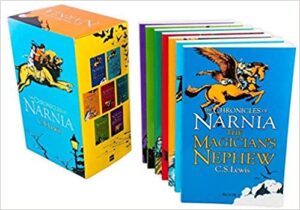 The Complete Chronicles of Narnia

The Chronicles of Narnia: Chronological Order

If you like The Chronicles of Narnia, you may also want to see our reading order for the Oz Books by L. Frank Baum, or our guide to Diana Wynne Jones’s Chrestomanci series. Don’t hesitate to follow us on Twitter or Facebook to discover more book series.

I have read all of the Chronicles of Narnia books in the 'old order' and I totally understood them. I think publishing order is totally fine because after all some kids would have to read those books when they came out if they read the other ones, and the chronological way was made after all of the books were written. I love these books, and I don't think it matters on the order that you read them, but I suggest one thing: The Magician's Nephew kind of spoils the Lion by the creation of the wardrobe but does not say what happens; I would rather think the wardrobe is just a plain wardrobe, because it is made in the Magician's Nephew. The Horse and His Boy spoils the end of the Lion because **SPOILER** it says that Peter, Susan, Edmund, and Lucy are Kings and Queens of Narnia **END OF SPOILER**. In the Silver Chair, it kind of spoils Ramandu's Island in the Voyage of the Dawn Treader and part of Prince Caspian, because he became **SPOILER** King of Narnia **END OF SPOILER**. The Last Battle pictures the other Narnia books as a history and at the way end of it spoils The Horse and His Boy mostly, but some other ones on how they survive/die. Prince Caspian spoils the Lion, the Witch and the Wardrobe just like The Horse and His Boy. So, I would encourage to read it in either chronological order or old order first, but you can read them whatever way you want the next time, and maybe catch something small that you never knew.

You have pretty well described for Narnia about how to get in.